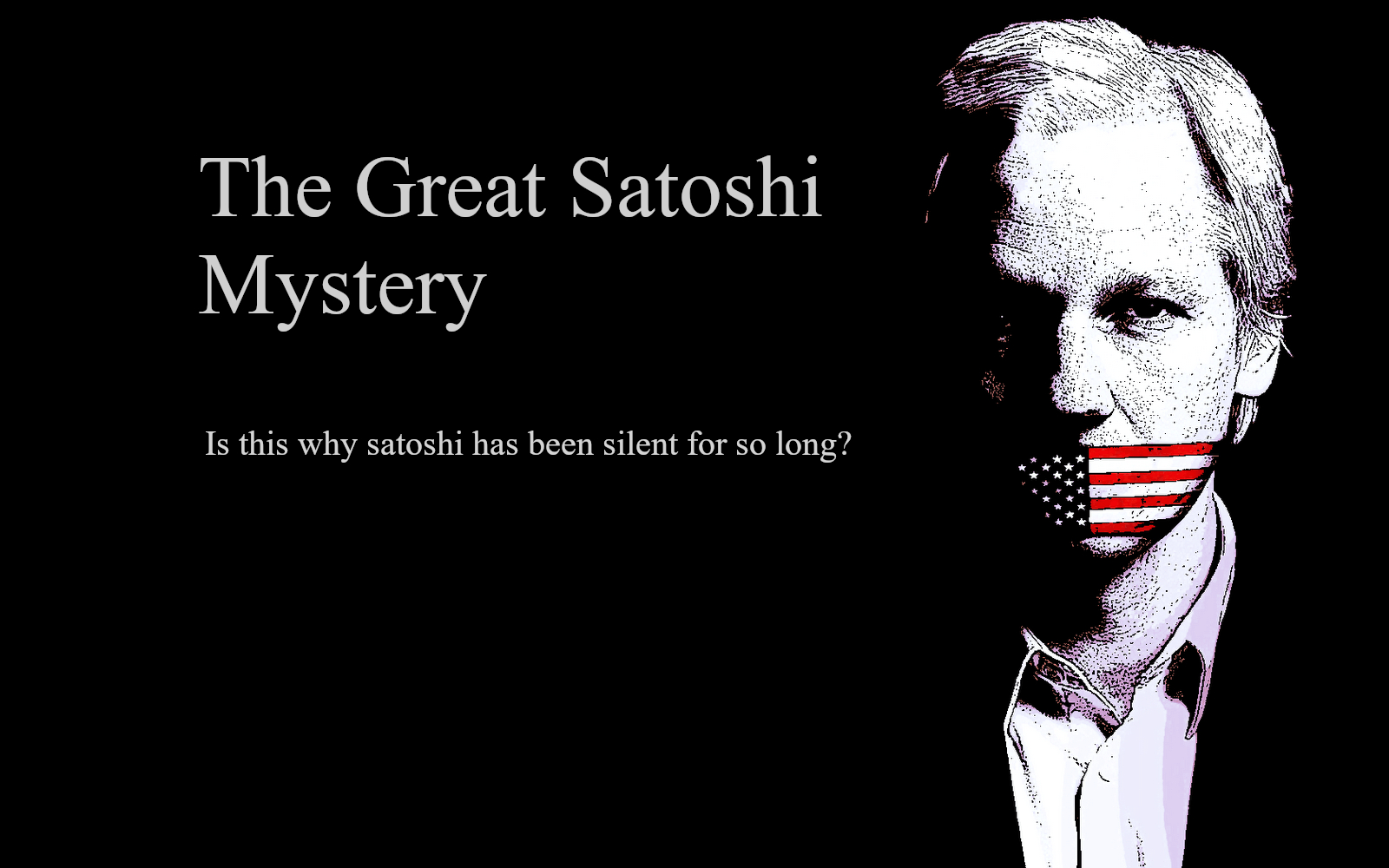 Is this why Satoshi has been silent for so long? And what could it mean for Bitcoin?

Bitcoin has had many names put forward for the real identity of its creator. None more infamous than Craig Wright. Other candidates for the creator of Bitcoin were, Wei Dai, Hal Finney, Nick Szabo or Dave Kleiman.
One name is commonly missed off this list, Julian Assange.

In this article I will present the case that Julian is Satoshi.

Satoshi, the white-paper & his hidden messages:

Use of British spelling & idioms in Bitcoin source code comments and Satoshis forum posts lead many to believe he or she is from the UK, Australia or somewhere else in the Commonwealth. Stored in the genesis block of bitcoin was a message referencing the UK Times newspaper, it reads.

The white-paper, its references to other attempts at digital cash and the design and function of the Bitcoin network could be called, inherently libertarian, or even anarchistic. Assange described himself as an advocate of information transparency and market libertarianism in an interview in 2010 [0], these values are very close to those of the Bitcoin whitepaper & network.

Julian wrote the following about Bitcoin in an AMA on Reddit.

In 1995, Assange got involved with Tim May, a respected member of the Cypherpunk movement and who in 1992 released the “Crypto Anarchist Manifesto”. The Cypherpunk movement brought out Assange’s distaste for centralised authorities. The WikiLeaks co-founder had ignited a discussion around digital cash in a series of comments in the movement.

Assange was a member of the Metzdowd Cryptography mailing list [1] , the place where the original Bitcoin white-paper was posted. However he did not participate in the initial or subsequent discussions of the paper. At least, he never participated using his real name.

Assange, like Craig grew up in Australia. They also both studied computer science & cryptography. They both subscribed to the Metzdowd mailing list. And the two have made public comments about each other. Craig said about Assange in a Medium post [2]

“I do not like Wikileaks, and I have never been a fan of Assange’s methods. More importantly, I am strongly opposed to criminal markets and bucket shops. Ross Ulbricht and others like him are criminals. They are not freedom fighters, they are not libertarians. They simply are predators, and they are all that Bitcoin was designed to make far more difficult.”

Wikileaks, rather unusually, responded to this article by Craig with a tweet stating the following.

This charged tweet was an odd move on Wikileaks part. Wikileaks followed up this tweet with another containing documentation from a GitHub repository called CultOfCraig [3]. Dedicated to documenting the time-line of his alleged forgeries, which WikiLeaks has ‘independently’ verified. Being hosted on GitHub, and named using camelcase suggests that the movement was started by programmers.

Satoshi was a very timid character, not wanting the spotlight to be on the project ‘too soon’ he was wary of Wikileaks high-profile usage of Bitcoin for donations. and made this known in multiple messages about the publishing platform

“I make this appeal to WikiLeaks not to try to use Bitcoin. Bitcoin is a small beta community in its infancy. You would not stand to get more than pocket change, and the heat you would bring would likely destroy us at this stage.”

“It would have been nice to get this attention in any other context. WikiLeaks has kicked the hornet’s nest, and the swarm is headed towards us.”.

Satoshi disappeared in 2010 and handed the network alert key and control of the code repositories to Gavin Andresen.

2010 was also a pivotal year for WikiLeaks and Assange. The Iraq & Afgan war logs were published that year. Chelsea Manning provided the information to wikileaks by . The year they published the ‘collateral murder’ video. In November of that 2010 Sweden issued an international arrest warrant[6] for Assange & also in that month US Attorney-General Eric Holder said there was “an active, ongoing criminal investigation”[7] into WikiLeaks.

Could it be that this explains Satoshis ghostly exit from the project?

The implications & my conclusion:

If Julian were Satoshi, what would the implications for cryptocurrencies and the blockchain space be?

To be frank, at this stage there wouldn’t be many, although Satoshi presented the original white-paper, He was not alone. Many people worked on its inception, and then its design and promotion in the years following and as such, they are all Satoshi.

Every large organisation worth naming is adopting Blockchain, to name a few, all the big accounting companies like KPMG and Deloitte, tech companies like Facebook and Google, even countries, like China. The virus has spread. Regardless of who built Bitcoin, it is here to stay.

1 thought on “The Great Satoshi Mystery”